St. Ben’s Vincentians Do Their Part During the Holidays 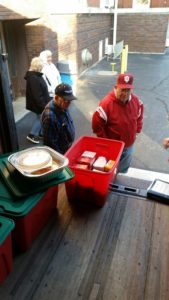 The following are two submissions from the St. Ben’s Conference sharing their outreach experiences during the holidays.

Feeding the Hungry at Thanksgiving

Recalling the Lord’s preferential option for the poor, St. Ben’s Vincentians gave thanks on Thanksgiving by seeing to the needs of the hungry poor: those within our midst, and beyond our Cathedral doors.

We identified families in need who had lots of kids, some of them our School parents, and some our SVdeP Clients. We invited them to accept Thanksgiving dinner groceries, and 30 of those families said “yes.”

On the Monday before Thanksgiving, with the help of Duane Goedde and his Team at the West Side Schnucks Market, we put together 30 lidded tote baskets filled with a 12-pound frozen turkey, stuffing, gravy, potatoes, corn, green beans, yams, a fresh-baked pumpkin pie with whipped topping.  We brought the totes to St. Ben’s aboard the SVdP Thrift Store box truck. Beginning at 3:15 p.m., they drove in, the St. Ben’s Tuesday Morning Group and Vincentians loaded a tote basket in the back seat of each, and wished them all a Happy Thanksgiving.

We did this with the alms you [St. Ben’s Parishioners] entrusted to our care for them.
Thank you. God bless you.

From the concrete pad outside the front door of Larry’s house, looking southwest down the street, we could still see the gently floating balloons mourning the deaths of Prince and Princess, the infant and toddler killed at the end of a fugitive-police car chase a while ago. Inside Larry’s front door seven people in 3 generations live in poverty, including Larry’s 2-year-old grandchild.

Larry asked St. Ben’s Vincentians for a car seat to replace the one his grandchild fouled; the one later destroyed by rats in the shed behind Larry’s house, after he’d hosed it down.

We wanted to tell Larry “yes”, but we reminded him that Prince and Princess were not properly secured in the demolished car where they died down his street. So we took the case back to our meeting at St. Ben’s for the wisdom of our other SVdP members.

Case closed.  God bless Larry and his family and all who aided in making this possible.