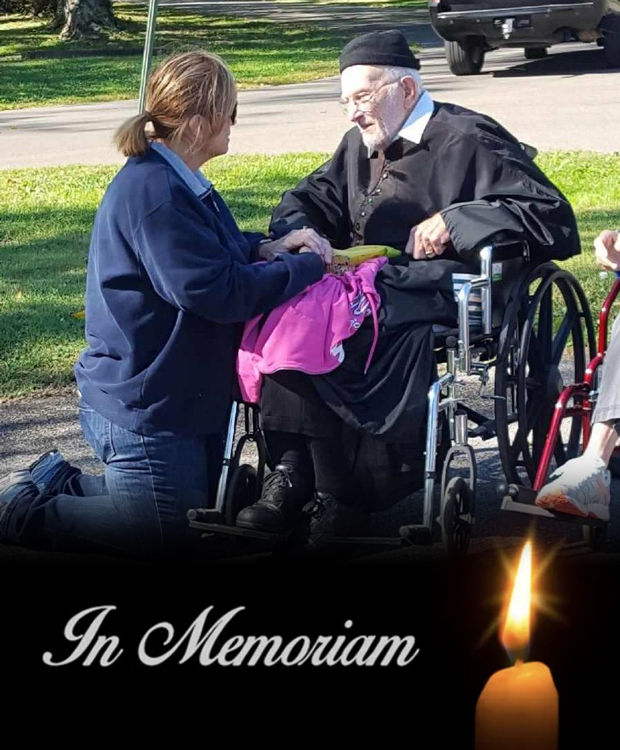 Vincent Brenner was a tremendous supporter of the St. Vincent de Paul – Evansville Conference. He attended many “Friends of the Poor Walks” and would dress at Saint Vincent de Paul. His last walk was in 2017. He passed away last month.

Obituary Published in Courier Press on May 15, 2019

Vincent Brenner passed away Sunday, May 12, 2019 at his home in Noblesville, IN. Vince was born in Evansville on January 5, 1931. He served in the US Marine Corps during the Korean War. He returned to Evansville, where he met and married Carolyn Jean Stricker. Vince spent most of his working life at St. Mary’s Hospital as a locksmith and maintenance man. In his spare time, he built and restored furniture, including altars and communion chalices, Shaker reproductions, and toys for his grandchildren. He was a longtime member and volunteer of the St. Vincent de Paul Society. Throughout his life, he served at a number of Evansville churches, including St. Anthony, St. Theresa and Good Shepherd before moving to Indianapolis to live with his daughter Laurie. He was a recipient of Good Shepherd’s Brute Award in 2010. In 2017, Vince and his son Paul went on the Indy Honor Flight #24. His interests included gardening and history. A man of many talents, he baked wedding cakes, played Santa, and could rock a chicken to sleep. He loved getting dressed up to go out to eat but was equally as content with a peanut butter and honey sandwich or rice sprinkled with sugar and a bit of cream.

Burial will be at St. Joseph Mausoleum where the Retired Veterans Memorial Club will conduct military rites.