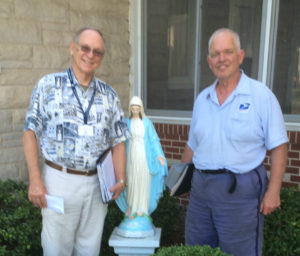 Well if you guessed about 73 you would be correct.  Bill Schulz (pictured at left) began working with the conference in 1972  when Father Dewig encouraged he and Dave Gries and Charlie Head and Walter and Richard Schnaus to reactivate this mission which had gone dormant.  He has done it all, serving as Conference President for many years, and has worked as the District Council Vice President in the 1980s.  When asked why he continues to make calls after all these years, he just says that :”When I see the people we call on, I see Jesus Christ”

Dan Werner (pictured at right) started with St. Theresa’s conference in about 1985 and has been the faithful conference treasurer for many years (note metal box he carries in the photo!).  He is a believer in the “Loaves and Fishes” theory of this work, in that every time it seems like the checkbook is about on zero, somehow, money arrives to allow the conference to do its work.  When asked how he became involved, Dan credited his father who was also a Vincentian for over 40 years.  Given that Dan comes from a large family and several of his siblings are also involved with St. Vincent, there are literally hundreds of years of service from the Werner Family to St. Vincent de Paul.  Says Dan:  “It’s a calling”

So if you see these two wondering around some of the less affluent areas within the St. Theresa Parish boundaries, you will know they are chalking up a few more years.